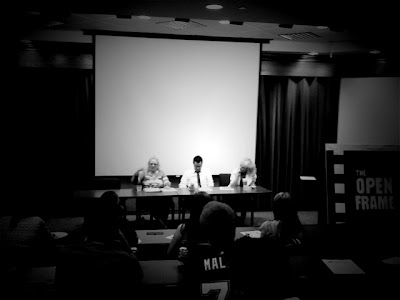 Thanks to Jay Oldaker for the sweet image (above) -- and for live tweeting the event. Check his tweets for some helpful links.

Our presenters Bo Bishop, Connie Collins and Candee Kramer all had really varied, but very helpful things to say about the art of story and the writers life. We had 35 attendees and plenty of delightful and enriching practitioners, artists, students and professionals. (click Bo & Connie's links in order to see some of their work)

Afterward, more than half of the audience stuck around for short films made by the presenters.

Thanks to Kerrie Fisher, Dalton Proverbs, Ashley Smith, and Connie Clapper for lots of the behind the scenes magic that made the event so enjoyable!

Thanks to our presenters for being so honest, available and engaging!

Don't miss the next INDIE FILMMAKER WORKSHOP: PRE-PRODUCTION on October 27th, 7:30 in Silk Auditorium.
Posted by Redbaerd at 5:36 AM 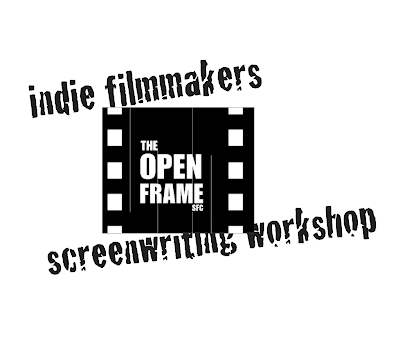 The Open Frame Film Festival at Malone University will hold an

INDEPENDENT FILMMAKER’S WORKSHOP on SCREENWRITING FOR THE SHORT FILM

The workshop was created to help prepare student writers as they develop short films for the OPEN FRAME FILM FESTIVAL, but community members are welcome.

An expert panel of screenwriters, living locally, but whose work has garnered wide acclaim, will talk about the skills, habits and experiences of successful screenwriters. Beginning writers won’t want to miss the opportunity to hear from and meet screenwriters Connie Collins, Bo Bishop, and Candee Kramer. Dr. Andrew Rudd, also an award-winning screenwriter will moderate the panel.

Bo Bishop graduated from Columbia University. Bo has written and directed a remarkable short film, Miles Wynberry of Glendale Lane. He has written multiple full length screenplays, too. His script Glass Factory Tours has garnered the attention of Hollywood producers.

Candee Kramer was a finalist in the Movie Deal Contest & a semifinalist in the Screenwriting Expo contest for short film scripts. A feature length script placed in the top 5% of the MORE Women in Film contest. She’ll be wrapping shooting on her first short film as a producer just days before she joins us for our workshop.

This event is FREE! But only 30 participants may participate in this hour-long workshop, so RSVP to Kerrie Fisher by phone (330.471.8201) or email (kfisher @ malone dot edu) ASAP. First come, first served.
Posted by andrewerudd at 4:15 PM

We're beginning the Open Frame year with a series of lunches that re-screen the films shown in last year's Open Frame followed by a Q & A with many of the filmmakers. Each lunch will be held in the Conference Rooms at the back of the Brehme Center. Carry your lunch in from the cafeteria and watch and dialogue. The event is free -- you can come one day or all four!

ACROSS THE UNIVERSE(ITY) & PRAYER WARRIORS

ANOTHER WINTER IN CANTON & HUGGING STRANGERS

DEFINITION & OEDIPUS (and a few extra shorts)
Posted by andrewerudd at 11:36 AM