Nate Merritt, Trey Duplain, and Santino Vitale are looking to fill roles for their upcoming short student film; Nate is a sophomore Communications/Film major at Malone University, Trey is a junior English major at Walsh University, and Santino is a burgeoning stop-motion animator (who is still in high school).

The film revolves around Steven, an apprehensive therapist with relationship problems and interesting patients, including a suicidal ice cream truck driver and a man who is sexually-attracted to cartoon rabbits. Steven’s insecurities are rooted in his own psychological issues: he is haunted by hallucinations of a womanizing, cigar-smoking hamster. His problems with women begin to resurface when an attractive female patient steps into his office.
We will be submitting the film to the Canton Film Festival at the beginning of September, so this is an urgent casting call; we will also submit it to the Open Frame Film Festival and other film festivals in the future.

Because of our lack of budget, this is a passion project and the acting will be on a pro-bono basis. Of course, food will be provided on-set and anyone acting will be allowed to use footage for their reel. Filming will take place in the Canton area in early August. We will gladly send a copy of the script upon request, and film reels will be accepted in place of auditions.

We are still casting multiple roles:
-The protagonist, a timid and socially inept 30-something therapist, STEVEN. His waning confidence leads him to seeing a therapist of his own. He also suffers from hallucinations that are brought on by his deceased father’s expectations of hyper-masculinity. Steven is a high-brow bachelor with kind and gentle demeanor.

-A manic pixie dream-girl in her late-twenties to early-thirties, MADELEINE, frequently visits therapists in search of the answer to a problem she cannot define. Her determination to reach the inner layers of her psyche leads her to Steven’s office where her unique sense of style and her own uncertainties catch Steven’s eye. Madeleine is an eclectic blend of fun and sophistication, a combination of Audrey Hepburn and Zooey Deschanel.

-A greying, reformed hippie in her 50’s, DIANE, serves as Steven’s therapist. Though her earthy decor and plethora of pillows makes her look like a witch doctor, her methods of practice are far less savage than chants and shrunken heads. Diane is genuinely concerned with the mental health of her patients.

-An overweight, cigar-smoking patriarch with a sausage-stained wife-beater, STEVEN’S FATHER, is a blue-collar, foul-mouthed bully from Brooklyn in his mid-forties. He is angered by Steven’s inability to live up to his expectations and pressures him to pursue women “like a man.” His poor health is sending him to an early grave. This role takes place during the flashback scene, but would also serve as the voice of TONY, a hamster that personifies Steven’s father and haunts Steven.

-A gawky adolescent around 17, YOUNG STEVEN, lives in fear of his emotionally-abusive father. He only enjoys sitting in his room, playing with his pet hamster. Young Steven is only in the flashback scene.

-A suicidal ice cream truck driver, WILLIE, is under the pressure of his mother to continue on the family business. He is one of Steven’s patients. Willie is a lanky man who is torn between having to endure listening to “the Entertainer” day after day and exchanging money with grubby children or breaking his mother’s heart.

We’re also looking for an editor and a DP. As is the case with the actors, any work done would be pro bono as we have a $0 budget, but we'll definitely feed you and let you use whatever you want for your reel. And if we ever make any kind of profit from it (which we are not expecting to), we would give you a share. We were hoping to film as soon as possible, as our goal is to submit it to this year’s Canton Film Festival (the deadline is 1 September). I’d gladly send you the script so you can look it over and see if this is something you’d be interested in working on.

if you're interested you should email Nate at nemerritt1 at malone dot edu
Posted by Redbaerd at 8:16 AM 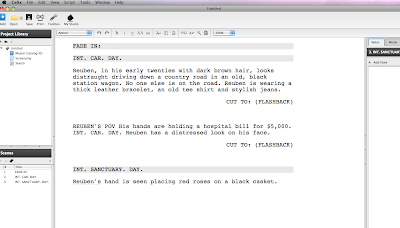 This year the Communication Arts Department will sponsor a script writing contest to find one script that might be developed into a festival-ready short film of the highest caliber. All scripts submitted to the contest will be reviewed by five qualified judges. Writers will receive feedback both in the form of narrative comments and rankings based on the various criteria. Any script with an overall ranking of SUPERIOR will be eligible for the narrative departmentally sponsored film. The top script (regardless of whether it is chosen to be produced) will receive an OPEN FRAME AWARD at this year’s festival event.

You should submit your script by email to Andrew Rudd at his Malone email address and your script should be in PDF format. Again, with a title, but NO authorial name. In the email you attach your script to, you should list your name, phone number, and the script name.

Scripts are due on September 12th, 2011 at 8 am. Contest winners will be announced on September 20th at 5 pm on the Open Frame Blog.
Posted by andrewerudd at 9:07 AM

Getting Ready for NEXT YEAR!

I'm pleased to announce the timeline of next year's Open Frame.

You'll notice that we're taking a year off from sponsoring Indie Film Workshops -- but only because we want to support our partner organizations nearby who are providing great similar resources.

Watch for more posts in the coming days regarding each event and contest and its deadlines.


Also keep an eye out for exciting announcements about a new venue this year.
Posted by andrewerudd at 9:04 AM