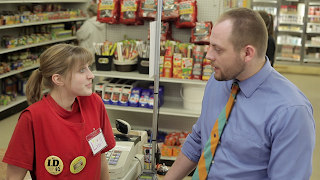 CUSTOMER SATISFACTION
When Erin Chilensky and I first came up with the idea for Customer Satisfaction, we were poking fun at ourselves. There have been so many times in our friendship that I have told her that someone did something horrible to me, only to have her respond skeptically, “I don’t think that really happened like that.” She was usually right. The “slight” against me was a result of my perception of events, and not an accurate representation of them. In Customer Satisfaction, I wanted to explore what it would be like for a person to be so wrapped up in her own little world that it would be difficult for her to recognize what other people were feeling and seeing, or even what effect her actions had upon others.
The process of making the film was amazing. It was the first time I have worked closely on a film project with non-students, and I think their enthusiasm inspired me and definitely made this film what it is. It’s more or less a workplace comedy, and so the characters are, for the most part, caricatures of people you have no doubt encountered, especially if you have ever worked retail. At the same time, this isn’t a film about the workplace as much as it is a film about the brief encounters we have with others in that kind of environment.
And so, when you’re watching this film, I hope that you laugh. I hope that you find the characters a little absurd. But I hope that you won’t be too hard on poor Ledell, who is secretly me, and is secretly Erin, and is secretly all of us at some point in our lives, whether we like it or not.
taylor hazlett,  director 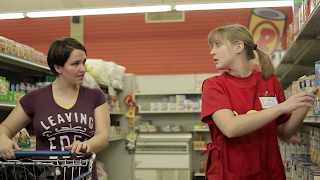 Posted by student manager at 4:02 PM